My latest build matches my passion for motoring culture: it’s the MOONEYES headquarters located in Santa Fe Springs, California.
Dean Moon was a Hot Rodder and innovator of speed parts. He established a company that became an icon in the Hot Rod industry. Starting his business from modest beginnings in a garage behind his father’s Moon’s Cafe in Norwalk, he grew it into an internationally recognized brand name.
In 1962, he moved the company to the Moon Equipment building in Santa Fe Springs, California, this historic location at 10820 S. Norwalk Blvd. is where MOONEYES still resides today.
A pair of cartoon eyes on a bright yellow background have become the most iconic logos in the hot rodder universe.

Inspired by the Dean Moon’s history I’ve recreated the MOON HQusing LEGO bricks, both the interior and the exterior of the building.
In the garage there’re a lot of tools: a roller cabinet, a workbench, the pendant lights, a sink, the column drill press and a lot more. Everything in bright yellow of course. Remarkable the American flaghanged on the wall and the electrical outlets and conduits. What about the surfboard displayed on the wall?
The exterior is enjoyable and it features many details. The two rolling shutters and the electricity poles are the ones I prefer.
To complete the work I’ve built the well known and famous MOON pick-up, a ’68 Ford F100, and a Hot Rod based on a ’32 Ford model B.
The only difference with the real HQ one is the color of the exterior walls, the entire wall in bright yellow (like the original) looked too odd in the diorama, better the white/yellow combo. 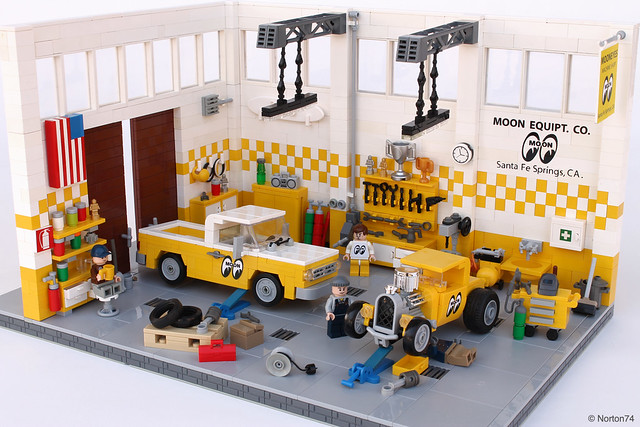 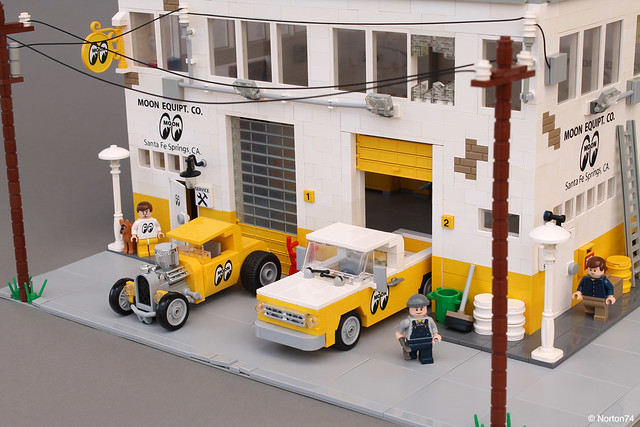