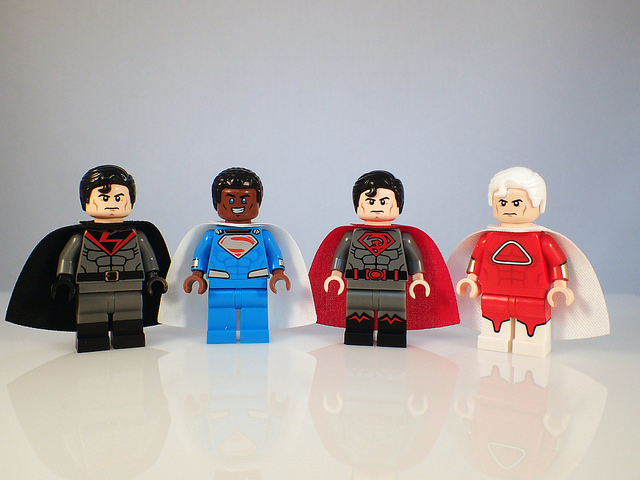 Lego Superman of The Multiverse

Superman of Earth 2 (by CyclopsBricks)

Overman is an alternate universe version of Superman, who landed in Sudetenland instead of Kansas and became the champion of the Fourth Reich. With Kryptonian technology, Adolf Hitler was able to win World War II and conquer the planet. As such, Overman was really only opposed by the Freedom Fighters. Overman has been a member of the JLAxis, New Reichsmen and Supermen of the Multiverse. He has two clones: the female Overgirl and the failed Antihuman.
Overman first appeared in a cameo 52 #52 (2007), but was properly introduced in Grant Morrison‘s Final Crisis: Superman Beyond.
Both versions of the character were created by Grant Morrison (2008).

Kal-El was one of the last survivors of the planet Krypton, doomed by his father’s Jor-El’s own attempts to avert its sun’s destruction. Rocketed to Earth, he was found by Jonathan and Martha Kent; growing to maturity and gaining great powers under Earth’s yellow sun, he would grow to be the mighty Superman, defender of the Earth alongside the likes of Batman (his own childhood friend) and Wonder Woman in the “Ternion”, themselves members of Earth 2’s Wonders of the World. After over a decade of adventures, he and his wife Lois Lane found and raised his cousin Kara as if she was their daughter. She eventually adopted the identity of Supergirl, although later on her time with her friend Helena Wayne on Prime Earth would have her become Power Girl.

In spite of warnings throughout the years–the New God of Apokolips Intri attempting to abduct him numerous times throughout his life for her lord Darkseid, and a meeting along with Batman with their counterparts from Earth 0 arranged by the chaos-bringer Kaiyo that would be wiped from the minds of all involved–when Steppenwolf erected Boom Towers across the world in order to invade it with his Parademons, even in Metropolis, Superman was completely unprepared for a threat of such a scale. In one of the Wonder’s battles against Apokolips, Terrence Sloan used opal Kryptonite on Superman causing him to become insane, in order to distract Superman from his plans. As Superman attacked Wonder Woman, Terry continued and succeeded with his plans of destroying several places under Darkseid‘s Anti-Life Equation, despite Batman‘s intervention. The opal Kryptonite self destructed as programmed by Terry.

As the war raged on, Lois died and Metropolis fell; during their final day, Superman, Wonder Woman and Batman attacked the Metropolis tower in an effort to destroy them all in a chain reaction. Superman provided the distraction but was completely overwhelmed and unfocused by the horde of demons attacking his dead city. Before he could save Diana, his physiology was exploited and he appeared to have died from an enormous burst of solar energy.

Kal-L of this reality follows much of the similar known reality of being rocketed to Earth from a dying advanced culture.

The rocket trajectory results in the ship landing on a Ukrainian collective farm in Soviet Ukraine, under Josef Stalin‘s government. The baby is immediately taken in and recognized as an alien with advanced powers and abilities that will be used for the greater good of the country. When Superman reveals himself to the world it is noted that a 12 hour difference in the flight path would have had him land in the United States.

Growing up as a Soviet citizen, the future Superman is basically shown as a good person who dedicates his abilities to the safeguard of Soviet citizens and some of the people of the world as he spends most of his time detecting and preventing accidents. Over the intervening years, Superman becomes a member of Stalin’s inner circle and is used as a propaganda event to bolster Stalin’s regime. It is not until the United States CIA prompts S.T.A.R. Labslead scientist Lex Luthor to develop a plan to destroy him does Superman begin to openly and actively support the arms race between the United States and the USSR.

Lex Luthor chooses to create his own version of Superman through cloning to combat and overcome the original. Luthor decides to crash Sputnik into Metropolis which will bring Superman to the event and hopefully allow Luthor to gather genetic material of Superman. As planned, Superman arrives in time to stop the deadly crash. The United States government claims the probe and Luthor gets the samples he needs in order to create his copy which proves to be defective and is named Bizarro. Luthor sends his Bizarro off to engage Superman who is attending a state party which Wonder Woman is attending. Bizarro crashes the party and the two fight. Their battle is so aggressive it accidentally causes a nuclear missile to launch. Bizarro proves himself to be a true genetic descendant of Superman as he sacrifices himself to save millions from the nuclear explosion. Superman tries to distance himself from the potential destruction he has caused and the power battle of the two governments but it spurred to actively change the world when he meets with Lana Lazarenko, his childhood sweetheart who is suffering along with her children. Deciding to actively lead the government, Superman assumes leadership of the country to transform it into a utopia after Stalin is poisoned by his son, Pyotr Roslov.

Over a period of twenty years or so, Superman and Wonder Woman worked together to bring about a better world with Superman unaware of Wonder Woman open attraction to him. Though Superman has advanced the Soviet Union to almost world wide control without resorting to war and virtually eliminated poverty, disease and the like, his plan was starting to control the populace directly. But the extent of that direct control is not known until revealed to be done by brain surgery techniques that pacifies dissidents into obedient slaves, or “Superman Robots”. The Batman developed as a direct result of the horror of the true state of Superman’s society as he was orphaned by the disgruntled son of Stalin, Pyotr who was pushed aside by Superman. But Pyotr’s ruthlessness serves him well enough to become the head of the KGB. Batman works against the system of Superman who views the safety and good at the cost of human free will as too costly and seeks to overturn Superman regime.

Luthor, still scheming against Superman over all these years, was involved in supporting Batman’s activities as well as developing a computer core called Brainiac that is created to seek out a plan to defeat Superman. Superman overcomes both, but at the cost of Wonder Woman’s health who is badly injured in a kidnap plot and Brainiac shrinks down Stalingrad and its citizens to a bottled city neither of which Superman is able to restore to normal. While not completely defeating him, these events deeply affect Superman, turning him ever so much more dark in his need to safeguard the innocents around him, even at the cost of the individuals’ freedoms. Superman takes the Brainiac computer into protective custody to prevent anymore such attacks and supposedly reprograms it to be a subservient robot-making-slave for the good of the Soviet Union.

At the beginning of the new century, the Global Soviet Union is a world-wide country with the notable exception of the United States of America. The USA has suffered a second civil war while the Soviet Union has no crime, no poverty, no unemployment, and no freedom of choice. The conversion brain surgery is now a public punishment for the dissent and open opposers of the government. Superman is still trying to operate as a good person and repeatedly refuses Brainiac’s suggestions of openly invading the USA and ending its destructiveness. Superman’s primary failure of Stalingrad has become even worse as the shrunken city is ravaged by a microscopic germ.

After an almost lifetime of failed events, Luthor decides on an open attack plan by openly controlling the United States as an active platform of attacking Superman and his regime. Luthor runs for and wins the American presidency which he basically turns into a dictatorship to grant some prosperity to the once defeated country in getting the people to support his ideology. Luthor confronts Superman in the Siberian Fortress of Solitude and declares open war against Superman. Superman relents in accepting the terms of war upon seeing Luthor’s open attack force of the Green Lantern Marine Corps which are led by Colonel Hal Jordan and comprise of Privates Scott, Stewart, Rayner, and Gardner and supported by the Amazon forces commanded by a highly disillusioned Wonder Woman and other superpowered beings.

The battle against Superman does not stop him as Superman enters the U.S. White House in triumph where Lois Lane-Luthor defeats Superman with a simple note that reads “why don’t you just put the entire world in a bottle, Superman?” Reminded of his greatest defeat and the reason for his open domination of humanity, Superman relents and orders Brainiac to end the invasion and return home. Brainiac openly defies Superman and reveals that he will control humanity for his own purposes. But Luthor deactivates the rampaging robot which overloads the nuclear power source of the invasion ship into basically a bomb. Superman pushes the invasion ship into outer space, where it blows up supposedly killing Superman in the offworld explosion.

Seemingly rid of the open control imposed by Superman’s beneficial society, Lex Luthor reforms the planet and its governments into a new philosophy of “Luthorism” that paradoxically uses several of Superman’s ideologies. Luthor relents his complete control and develops an age of peace and stability. Luthor retires to scientific pursuits which includes colonizing the solar system and curing all known diseases. Luthor extends his life to reach over two millennia. It is at Luthor’s funeral that Superman finally reappears, revealed to be apparently immortal with no age in all the intervening years.

Centuries later after Earth’s sun turns red and weakening him Superman wonders if Luthor’s latest descendent, Jor-L, is mistaken about his findings that Earth will fall into its own Sun. Jor-L sends his son into Earth’s past moments before it is destroyed and the rocket lands in “The Ukraine, Russia, 1938” (sic) effectively causing a predestination paradox.

Greatest hero of Earth 35 and a proud member of the Super-Americans.